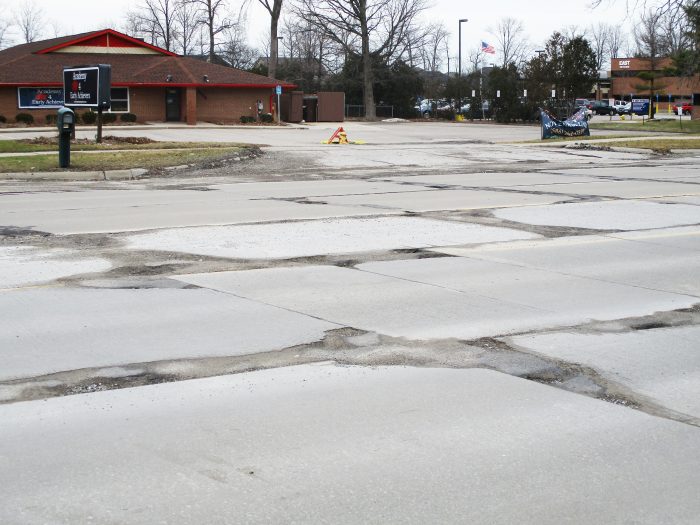 Potholes are damaging motorist’s tires, wheels and suspensions, with no relief in sight.

From Wikipedia:
The alkali–silica reaction (ASR), more commonly known as “concrete cancer”, is a swelling reaction that occurs over time in concrete between the highly alkaline cement paste and the reactive non-crystalline (amorphous) silica found in many common aggregates, given sufficient moisture.

The article below was penned by Roy Rose, Chairman of the Board  of Anderson, Eckstein and Westrick, Inc. (AEW),  more than ten years ago, and it’s still very relevant in today’s seemingly “worst ever” sinkhole dilemma that our entire area is experiencing at this time. He is a Professional Engineer, with more than 37 years of experience in many phases of civil engineering.

EXPLORING THE CAUSE OF POTHOLES IN NEWER CONCRETE PAVEMENTS
Roy C. Rose, PE, Chairman of the Board
Anderson, Eckstein & Westrick, Inc.

After a long cold winter, most of us are happy to see signs of spring. Unfortunately, as  the snow melts and the water on, in and under our roads freezes at night, then thaws during the day, cracking roads, potholes and other signs of deterioration appear. If, as you drive around town dodging the largest potholes you have ever witnessed, you are thinking that some of the newer roads are not lasting as long as they used to, you are correct. Why is this happening? Is the reason because we are not using quality materials? Is the standard of workmanship not as high as it once was? Or is it the equipment being used today? To some extent, all three of the above issues have contributed to the early deterioration of our newer concrete roadways.

As Southeast Michigan develops, contractors have to go further away from the Detroit area to find sources of aggregates, sands and cements needed to construct new roadways. Up until the late 1980’s and early 1990’s, these materials worked together to form a good solid material, known as concrete. As we used aggregate sources from other regions, we have found that some of these sands reacted with the alkali in the cement, and caused the concrete to expand and crack, forming potholes. This reaction is called Alkali – Silica Reaction (ASR). Part of the problem with ASR is that it takes three to eight years to become visible a years to become visible at pavement joints, where moisture sits the longest. According to a national study prepared by the National Concrete Paving Association in 1990, even though ASR had shown up in several other regions of the country, it was not a problem in the state of Michigan. It was not until the late 1990’s and early 2000’s before we began to see signs of ASR in our concrete pavements in Southeast Michigan. Utica Road from 14 to 15 Mile is an example of a road constructed during this time period that developed an ASR problem. Prior to the discovery of this problem in Michigan, little if any material testing was done to determine susceptibility. Today, it is a standard test. 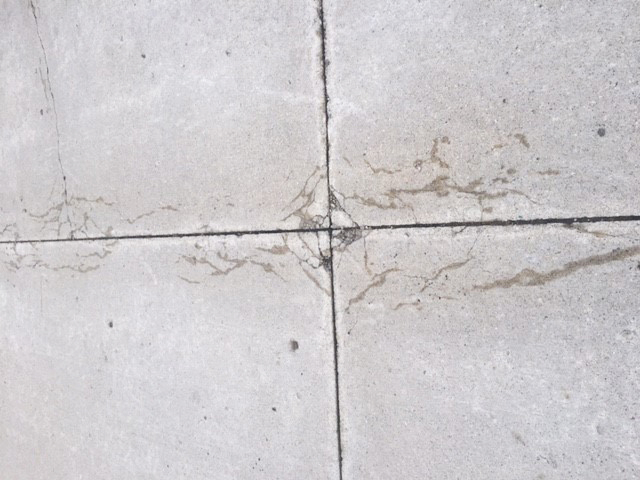 This pavement section shows the early signs of the negative results caused by Alkali-Silica Reaction (ASR). 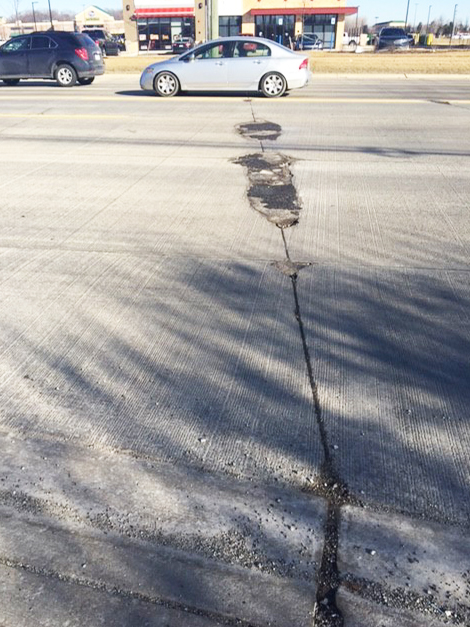 The ASR damage is more pronounced in this photo. 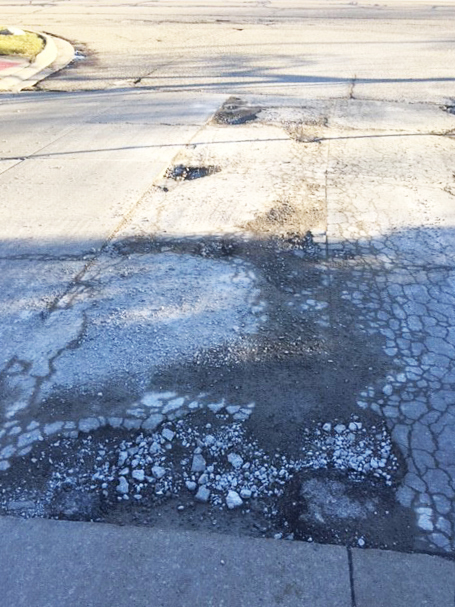 This is a very good example of the damage caused by ASR.

Another issue that has caused some of the potholes, usually in the middle of panels, is that the reinforcing steel mesh has been pulled too close to the surface. To protect the reinforcing steel mesh from corrosion, it must be at least 2” below the surface of the pavement. If, during the placement of the concrete, the workmen are not careful about the placement of the steel mesh, they can lift it too close to the surface. Over a couple of winter freeze-thaw cycles, the concrete will crack, allowing moisture to come in contact with the steel mesh. This moisture will cause the steel mesh to rust, then expand, and ultimately cause the concrete above it to pop out. Sections of Hall Road (M-59) have shown signs of this problem. 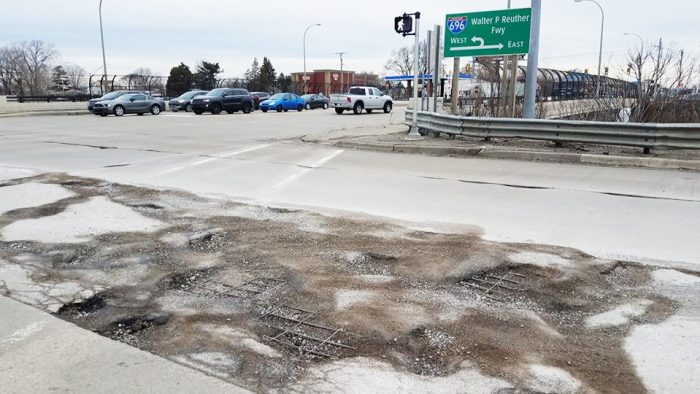 This photo of 11 Mile and Van Dyke in Warren illustrates the reinforcing steel mesh being exposed.

It is documented that concrete exposed to the Michigan freeze-thaw cycles can benefit from air entrainment. Air entrainment is the induction of very small air bubbles into the concrete mixture, allowing the concrete a small amount of expansion when moisture in the concrete freezes and expands. For best results, the amount of entrained air should be about 6 percent of the total volume. It has been found that some newer equipment vibrates about half of the entrained air out of the pavement surface. This reduction does not allow the pavement to expand during freezing and thawing cycles, thereby causing pop outs. Today, testing is performed behind the paving machines to make sure that adequate entrainment exists.

There are many other factors that cause potholes in newer concrete pavements, but for the most part these three factors cause the majority of them. If any one of the above items occurred by itself, we probably would not have nearly the amount of potholes in newer concrete pavements that we have today. In most cases, research has found that when at least two factors occur at the same time, the problem becomes more serious and noticeable to the traveling public.

Newer pavements, designed over the last five years, have been adjusted to prevent these three main problems. Therefore, future concrete pavements should last the anticipated 35 years with normal maintenance and without the early development of potholes.

The article above was written more than 10 years ago, while the photos are from current examples of the effects of ASR and other factors that are causing massive pot holes and other concrete failure that is impacting motorists at an alarming rate. Additional comments from Roy Rose regarding this winter of 2017-2018:


After experiencing relatively mild winters for Southeast Michigan the past couple of years, this winter is more typical of a “normal” Michigan winter. We have had significant snow and rain, the temperatures have fluctuated substantially, and in many ways we’re somewhat “making up” for the bullet we dodged during the winters of 2014-2015, and 2015-2016. The pavement was still being stressed by many of the winter forces, and cracking was occurring, but not at the level this winter’s intensities are bringing to our roadways. In many ways, the more minor fractures and breaks that occurred previously are now being intensified, and we’re now experiencing and having to deal with what in effect is three years of potholes. The pothole situation we’re all dealing with on a daily level, are not necessarily the fault of the material or workmanship, but may very well lie at the doorstep of Mother Nature and the weather our area has been experiencing this winter.